Thoughts on being an MCSE

I was going to take this page down, as it's so obsolete, but, rereading it (it's from the late 90's or very early 2000's), I realize that it still has value.

This page is more philosophical than anything else. It's for you to visit when you need a break from studying, but still want to keep focused upon the MCSE certification. Below is a picture drawn by my friend Demian Meyer, MCP based on an idea of mine. 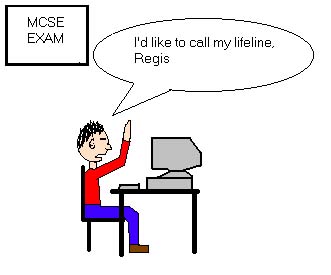 And, while I'm being silly, I should put in my MCSE song. It's sung to the tune of YMCA.

(I haven't gotten Mr. Smith's permission to use this, but hopefully, if he sees this, he'll give it.

There is also the error message haiku page. (If you visit this page, Explorer will tell you that you have to download Japanese capability. There's only a small part in Japanese, and unless you speak, or have interest in the language, it won't add to your appreciation of the page, so don't bother. As you can tell from the song, perhaps, I'm not a big fan of most schools. At least in NYC they have ads promising you high pay and quick employment. As you begin to investigate a little more, you find that the world has become wary of paper MCSE's.

I did start by going to a school. I won't say it was a total waste of time and money, but it certainly didn't prepare me for the exams. I chose it primarily because the owner seemed to have a lot of contacts in the Japanese community in New York City, and being semi-fluent in Japanese, I thought that this would be a good thing when I began to seek employment. However, the classes consisted primarily of lecture, lecture based on the textbooks that were supplied. I could have covered most of the material myself. Though there were occasional labs, they were few and far between.

The Value of an MCSE

I think that the devaluing of the MCSE may be due to the way that Microsoft presents it. An MBA from Harvard Business School is impressive, yet one would not really expect someone, fresh from graduation, to successfully run a business from scratch. There are a myriad of things, some small, some large, that only experience will help the person learn. Microsoft tends to take itself too seriously sometimes. If, rather than saying the MCSE is proof of a professional's competence, or whatever it is that they say, they simply said, an MCSE is an indication that a person has some knowledge, it would be a more realistic claim. It is an accomplishment, regardless of what the naysayers believe. When someone says to me, "Oh, it proves your able to pass tests" I answer, "Yes, and it's also proof that I'm able to learn something in a reasonable amount of time." Without a lot of luck, the MCSE isn't going to land you that 70K a year job, not without experience. Which segues nicely into my next topic.

Ok, you've gotten your MCSE. You have no real experience, and now it's time to find a job. If you have some intelligence, you're also going to realize that it hasn't really prepared you to jump into a place and take over their network. Helpful though it was to have the experience of the hard drive dying on your little home network, and instructive, if aggravating, the experience of getting the new hard drive, installing it, and then reinstalling the O/S was, it doesn't match suddenly being in charge of a network of a hundred users. Their PDC also is used as a file server for some very important files. It only has three hard drives, configured in a stripe set with parity. You monitor the use of the hard drives, and suddenly you find that the 15 gigs has become ten and a drive has disappeared.
Now, you're going to have to open up the PDC, probably over the weekend when no one is using it. There are two users that you see have files open on it, because they didn't shut down their computers when they went home. It's a policy you mean to implement but as these two users are primary producers, management isn't really backing you up. Tempting though it is to just shut down the PDC and let them lose their work, you, hopefully, have enough pride in your work to go to their boxes and shut them down. Of course, they're in two different buildings, one of which you'll have to use the freight on the weekend, and of course, one of the offices is locked.
This is not much of an exaggeration, and I'm sure other network admins have worse stories. At any rate, the point is that it's difficult to get hired without experience, and many people serve their apprenticeships at help desk, finding out that the reason the user can't make their computer work is because they don't realize that the monitor isn't the computer itself.

Most articles on finding work in the IT field mention how people skills, whether you like it or not, are important. If you are a network or systems administrator, you will have to explain to the users, in some way or another, that yes, the network is down, and no, it won't be up for awhile. How you deal with this is up to you, but my own opinion, no doubt based on a previous life in customer service is that one should remember, to paraphrase the old sales adage, that the user isn't an interruption to your work--they are the reason for it. If they all knew as much about computers as you do, then the company probably wouldn't need your services.

One of my users recently gave me an emergency call--she was unable to print and it was market week. (I work for a midsize garment company.) I rushed upstairs to find out that the printer was unplugged. Now, you may be reading this and thinking how foolish the user is. I disagree. She's very very good at what she does, and I'd be unable to do it. How often, during the Network Essentials course were you told that most problems happen at the physical level. I told the user, and sincerely, that it was part of my training and my job to know that the first thing to check is whether a machine is plugged in, and if so, is it turned on, and if so, is it connected to the network. I also pointed out to her that I'm not able to do her job and she isn't expected to do mine.

Many IT people just assume that users lie. Because of incidents like the above, I know that my users will be honest with me. If they did something stupid, well, perhaps I should consider setting a policy making it impossible for them to fool with their computers. I repeat--it is not the user's job to know all the ins and outs of their computer--it's your job to help them. You can sneer at them, and create bad feeling, and the next time they do something they'll swear to you that they didn't, and you'll waste a lot of time finding out what really happened. My users will say, well, I tried to do this. Or, they'll say, I don't think I did anything, and I can believe them. They may be wrong, but I know, at least, that it wasn't something obvious.